What are Meniscal Injuries? 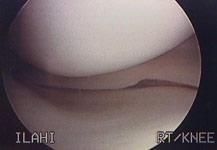 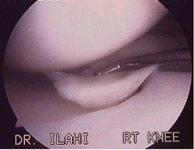 Flap tear of the medial meniscus of the right knee 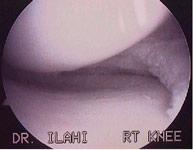 The knee joint is stabilized primarily by four very strong ligaments. Three of them, the anterior cruciate ligament, the posterior cruciate ligament, and the medial collateral ligament, connect the end of the femur (thigh bone) to the top of the tibia (shin bone). The lateral collateral ligament actually connects the end of the femur to the top of the fibula, which is a much smaller bone in the shin. The fibula and tibia are connected to each other by very strong bindings, so the effect of the lateral collateral ligament is to control the motion between the femur and tibia, just like the other three ligaments that connect these bones directly to each other.

The end of the femur being round and the top of the tibia being relatively flat, there is very little intrinsic stability imparted by the bony architecture. Rather, the stability of the knee is fundamentally dependent upon the ligamentous structures. Disruption of these ligaments can lead to instability of the knee joint. The degree of instability depends on the number of ligaments that have been injured and their capacity to heal. The medial collateral ligament and the lateral collateral ligament do have significant capacity to heal after injury. Therefore, isolated injuries to these ligaments can often be treated by bracing and activity modification and rehabilitation. Once the ligaments have healed, normal activity can be resumed. In contrast, the cruciate ligaments, being inside the joint, have very poor capacity to heal. Restoring function of torn cruciate ligaments therefore requires surgical intervention.

In contrast to the PCL, anterior cruciate ligament (ACL) deficiency is less well compensated for by rehabilitation. Although one can restore motion and strength to the knee, the instability that results from ACL-deficiency limits one’s ability to do cutting, pivoting, twisting, and jumping-type activities. Straight-ahead activities like jogging or bicycling are unaffected. However, sports such as basketball, soccer, or football are usually not possible for patients with ACL-deficient knees. An analogy can be made of a four-wheel vehicle vs. a three-wheel vehicle. A four-wheel vehicle can take corners a lot faster than a three-wheel vehicle due to the inherent stability provided by four wheels. However, on a straight track, both vehicles may perform similarly.

The ACL has such a poor ability to heal, that even surgical repair has not been very successful. In order to restore it’s function, we must reconstruct it. This means replacing the torn ligament with tissue to act as a new ligament. Many synthetic grafts have been tried and have uniformly met with failure. However, a high degree of success has been achieved by the use of tendons to act as the new anterior cruciate ligament. Traditionally, a portion of the patellar tendon (which connects the kneecap to the tibia) is used. The central third of this tendon is taken along with a small piece of the kneecap and a small piece of the tibia. This is then put through drill holes in the top of the tibia and the end of the femur to take the place of the torn anterior cruciate ligament. More recently, techniques have been developed to take a couple of the small hamstring tendons from the medical (inside) aspect of the knee to act as a new ACL. Also, tendinous tissue from organ donors has also been used to reconstruct the ACL. All three methods have a high degree of success and each one has advantages and disadvantages. Discussing these options with a surgeon skilled in all these various techniques is the best way of deciding which graft source is the best choice for your knee.

What if one loses an entire meniscus? A massive irreparable meniscal tear can lead to loss of the entire meniscus. Fortunately, technology has advanced to the point of allowing us to perform meniscal transplantations. In this procedure, a cadaveric meniscus is transplanted into a knee lacking that structure. Only certain knees are candidates for this promising technique, however. Dr. Ilahi is one of only a handful of surgeons in the Houston area with experience in this technically demanding operation.