What are some common Knee Conditions? 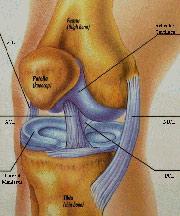 The knee joint is one of the most often injured joints in the body. It consists of three main bones. The femur (thigh bone) articulates against the tibia (shin bone). The patella (kneecap) also articulates against the femur. An intricate system of ligaments and muscles provides stability to the knee and allows for painless range of motion in order to flex and extend this joint. Also, a structure called a meniscus is present in the knee to act as a shock absorber. There are actually two menisci in each knee. One is the medial (inside) meniscus and the other is the lateral (outside) meniscus.

These menisci are situated between the end of the femur and the top of the tibia and serve to absorb the shock of weight bearing activity, and thereby lessen the forces on the joint surface of both the femur and tibia. The joint surfaces of the bones are covered with a very important layer of articular cartilage that allows for smooth gliding.